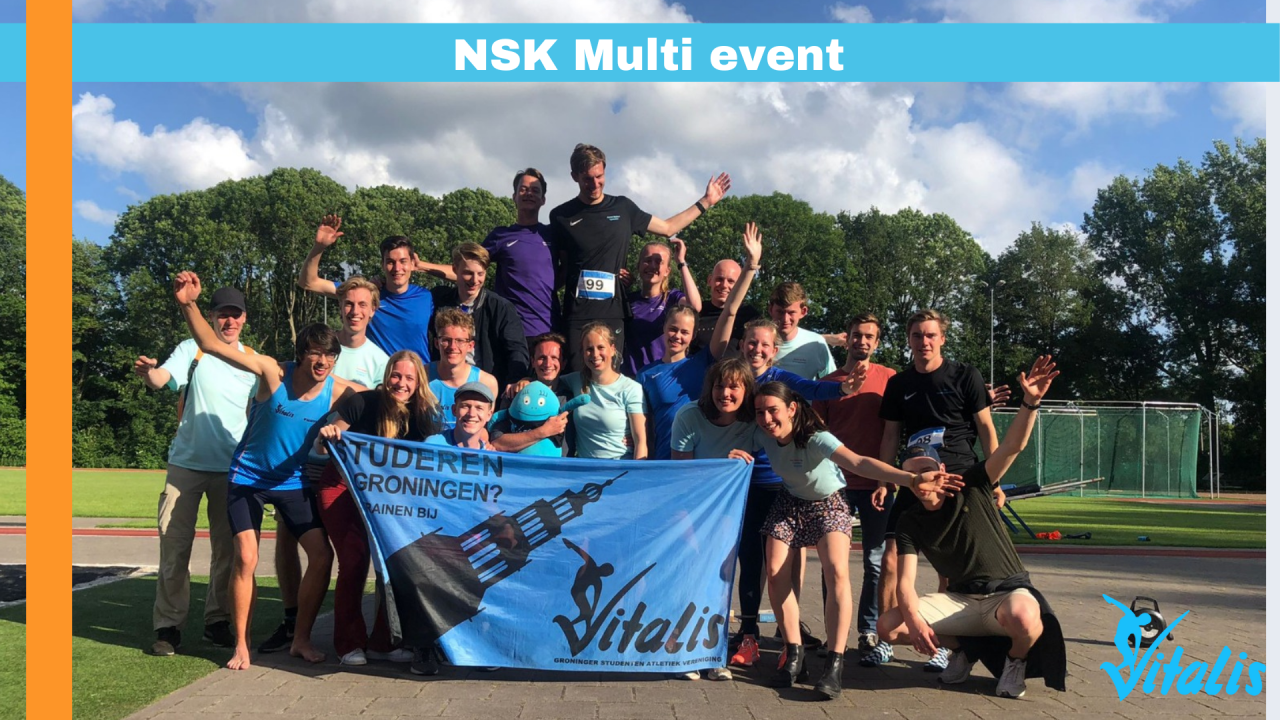 Last weekend, the long-awaited NSK multi event was finally there. The weather was good, the number of registrations was above our expectations and we had a great programme including the funny element "vlalikken" (custard licking). The week before we had a disappointment that the track had been disapproved, but we were very happy to see that it did not affect the atmosphere. The athletes came from far away, some even on Friday because of the long journey, but it was totally worth it. It was a weekend full of sportsmanship, sunshine and sunburn, cups of custard, beautiful outfits at the party and just plain fun.

In two days, the athletes competed in a pentathlon, a running pentathlon and individual events. With a little headwind at the 100m and a water station against the heat at the 1500m, 18 athletes managed to complete all five heats of the running pentathlon. They showed their strength and overcame lactic acid build-up at distances ranging from 100m to 5000m. In the regular multi event, no fewer than 53 people started. In addition to running, they also jumped and threw and achieved good performances. Unfortunately no one from Vitalis reached the podium in the multi event, but of course the other associations are also to be congratulated...

At the unofficial NK vlalikken Vitalis was in the finals! This was inevitable with a name as ''licking with Rens''. With a photo finish the first place just passed them by, but it was a nice battle with participants varying from the athletes themselves, to the 'licking leaders' team where even the competition leader participated enthusiastically. After this spectacle, a delicious meal was provided by the Middle Eastern catering company Yamen Cuisine as a good base for the party that followed. The athletes, judges and other attendees left in large numbers towards "De Brouwerij". The theme 'Baccardio' was well followed and the fitness hair- and sweatband's could be seen all over town by the end of the night. After a short night at the campsite or elsewhere in Groningen, the competition continued on Sunday. The pace was a little slower due to being hungover and the pole vaulting that took quite a bit of time, but with a bit of delay the day ended nicely with a prize ceremony while enjoying some pizza in the tribune.
All in all it was a successful weekend, we can already look forward to next year!