If you have any questions you can always email the secretary (secretaris@vitalis.org) or click below for more information about our association. 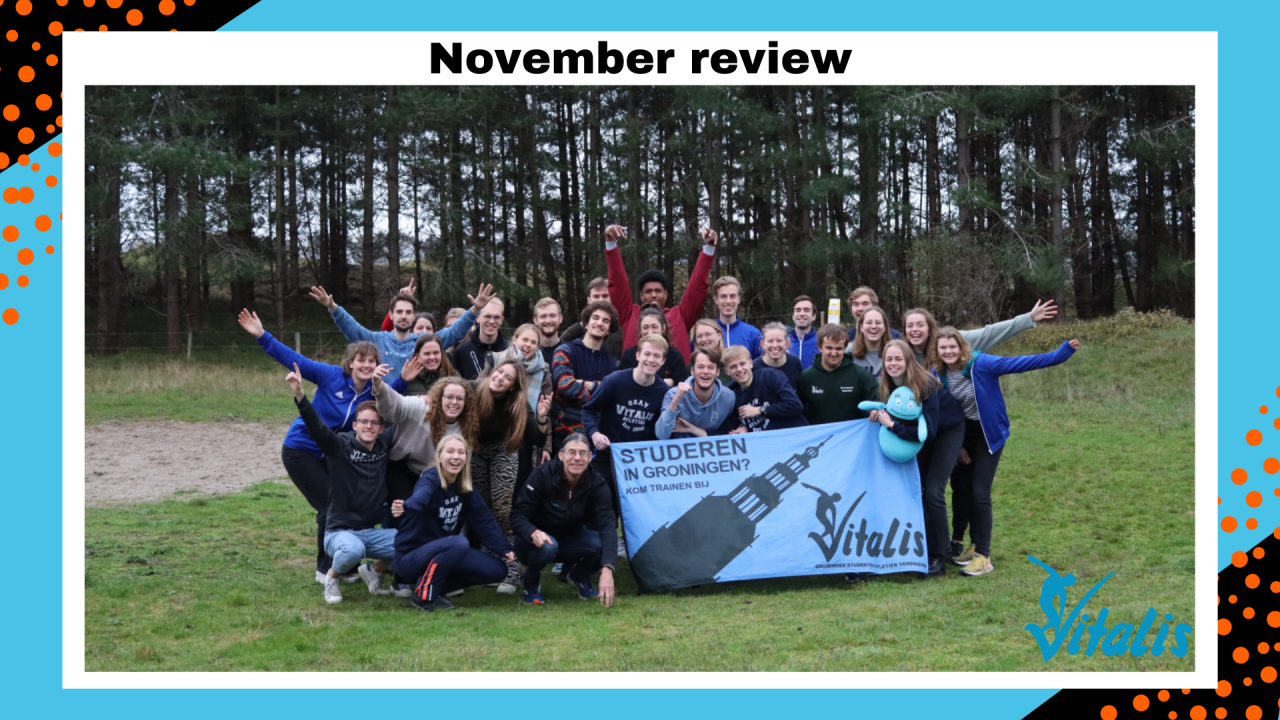 November was a busy month, full of fun activities. The month started with 2 races, the Plantsoenloop in the beautiful Noorderplantsoen where many vitalists were on the podium. Then also the Berenloop on Terschelling.

Besides the races, Vitalists were of course busy with other things, like social activities. The haut chic choc' social organised by the FeestCie was a highlight. I don't speak French myself but so it means you get to wear chic outerwear and something radically different downstairs. Be sure to check out the photos if you want a laugh.

In November, the cold really started but that didn't stop our sporty enthusiasts. All the way in Delft they were already at the start of NSK road and in Nijmegen for the Seven Hills Run. November also saw the start of the city park runs, would you like to join too? In December is the next edition.

There were also 31 Vitalists this month who participated in the running escape room, a great success. This month also saw the autumn training weekend on Ameland. Here people trained hard and enjoyed nature.

The Active members activity is also not to be forgotten, the whole first floor was full of Vitalis members, some knew more than others... I can tell myself it were very specific questions. But definitely recommended, at cafe de Toeter.

All in all; a super fun and sporty month. Enjoy the beautiful December month and the holidays! 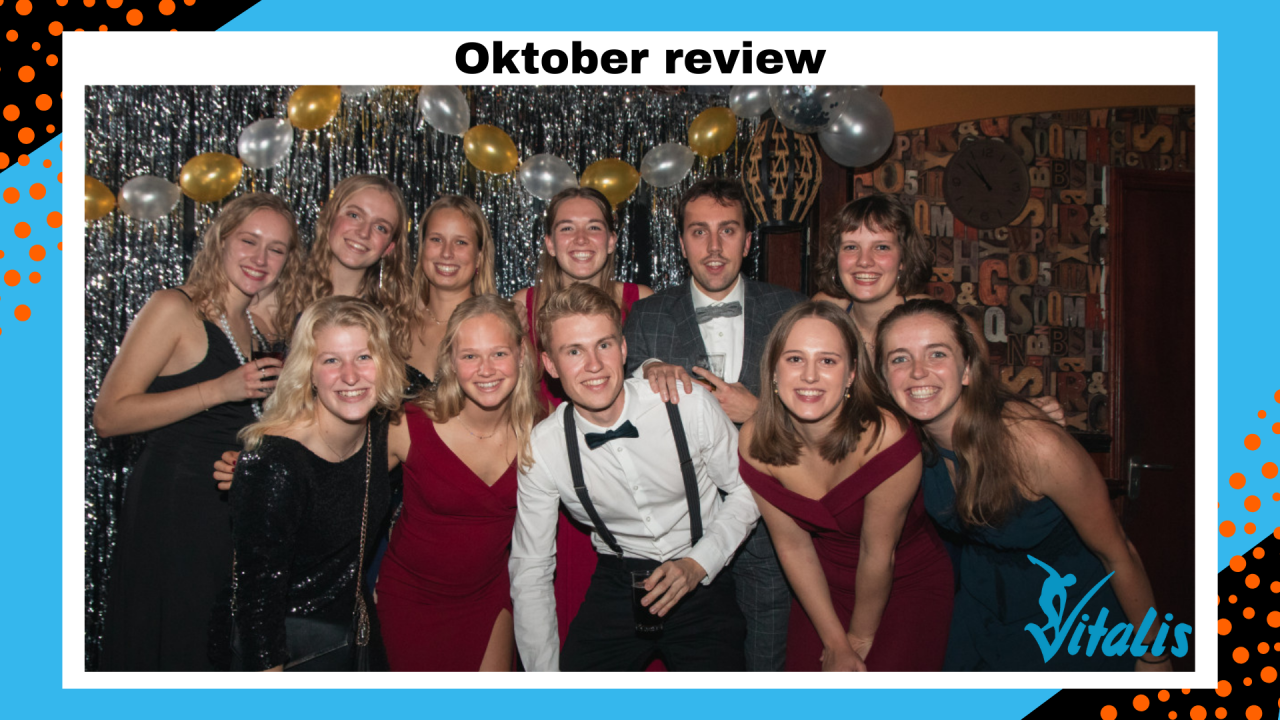 After a successful introduction period in September full of trainings and activities, hopefully all new Vitalis members feel like a part of the club! October was just as active with many races and socials to keep everyone busy. The first of the month began with the CK baan, which despite the rainy weather and recovery from the member’s weekend, there were many great performances! The races didn’t stop there, with around thirty Vitalis members taking part in the 4mijl van Groningen. With much better weather and plenty of support along the course, nearly everyone was able to set a personal record!

But of course with racing hard, there is also the opportunity to unwind with the borrel this month having the theme of Oktoberfest! With some great outfits and plenty of beer, this was a perfect evening to relax. Miriam was crowned the Borrelkoningin for collecting the most points in the last year by coming to the most borrels and always wearing a great outfit! The fun didn’t stop there however, as it was time for the gala. There were even more outfits seen here with the theme of Peaky Blinders resulting in a very smart looking crowd! After dancing the night away it was time for more running… this time the ACLO-Vitalis run. The race began on the track at the ACLO with athletes having a choice between one or two laps of the course. With plenty of Vitalis members and members of the ACLO taking part it was a fun and social evening.Just

One week later, many took the opportunity to try bouldering organized by the FeestCie which proved to be a challenging activity requiring a lot of strength! If you missed the bouldering, be sure to join the FeestCie again at the next borrel on November 9th. Or if you would like even more training, don’t forget to sign up for the training weekend which starts on November 25th, see you there! 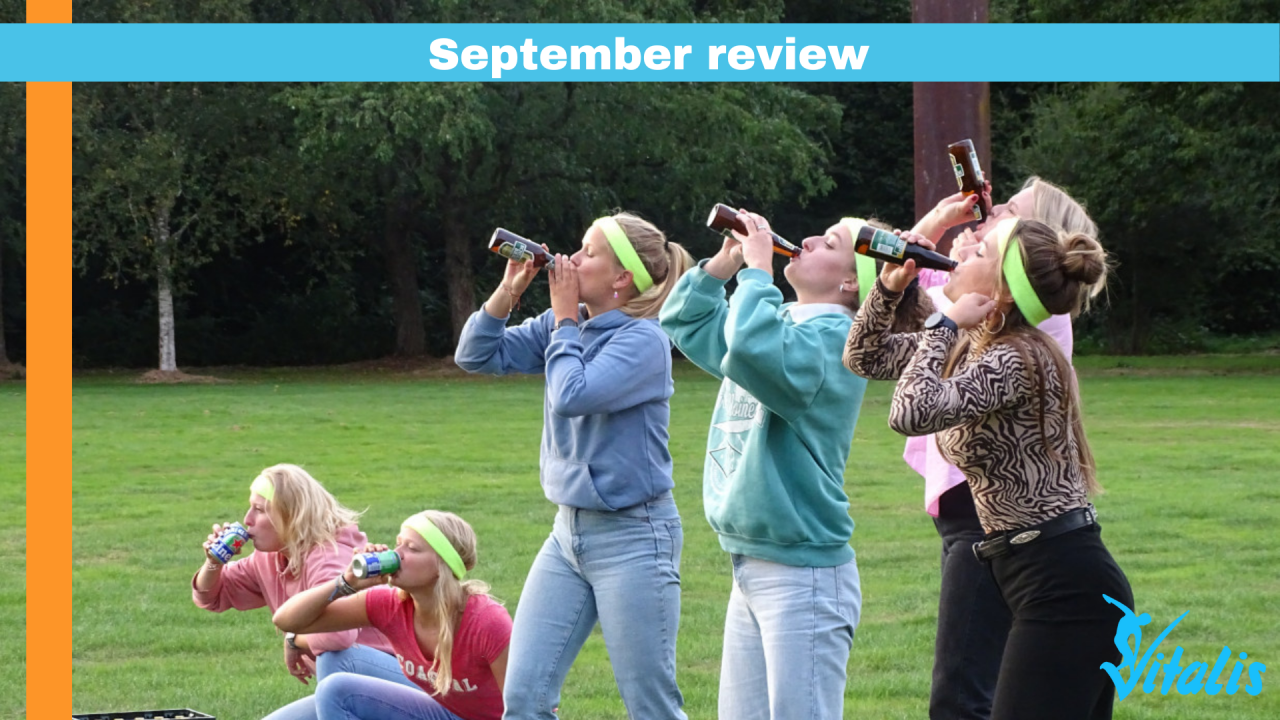 So to mention a packed month. September brought a lot of fun, records, and of course new members for Vitalis. It all started with a General Members Assembly in a cosy cafe De Keyzer, where the past six months were reflected. After this, every Vitalist could begin the intro period with a head full of fresh ideas.

And what an intro it was! With just under 90 intro members, Vitalis has once again managed to put itself on the map in Groningen student life. While of course people were introduced to the noble sport of athletics, there was also a lot of laughter during the running drink and pub quiz, the football tournament, and the association weekend as icing on the cake. A recurring theme in September was Flunkyball, which has been given an extra twist by replacing the beer with a delicious bowl of vanilla custard.

Not only has there been a peak on a social level but also on a sporting level the achievements of Vitalists should not go unnoticed. For example, during the club championships, club records were broken, podium places were won or regained and, above all, everyone put their best foot forward. Also during the 10x10 in Winschoten and the NSK Teams in Delft Vitalis fought for the prices. The latter has put the resistance of many to the test after an icy night in tents.

All in all, another successful month and we are looking ahead to October, including the 4 Miles of Groningen, the Oktoberfest drink, the Peaky Blinders gala, the AV-run and a mighty activity by the FeestCie!